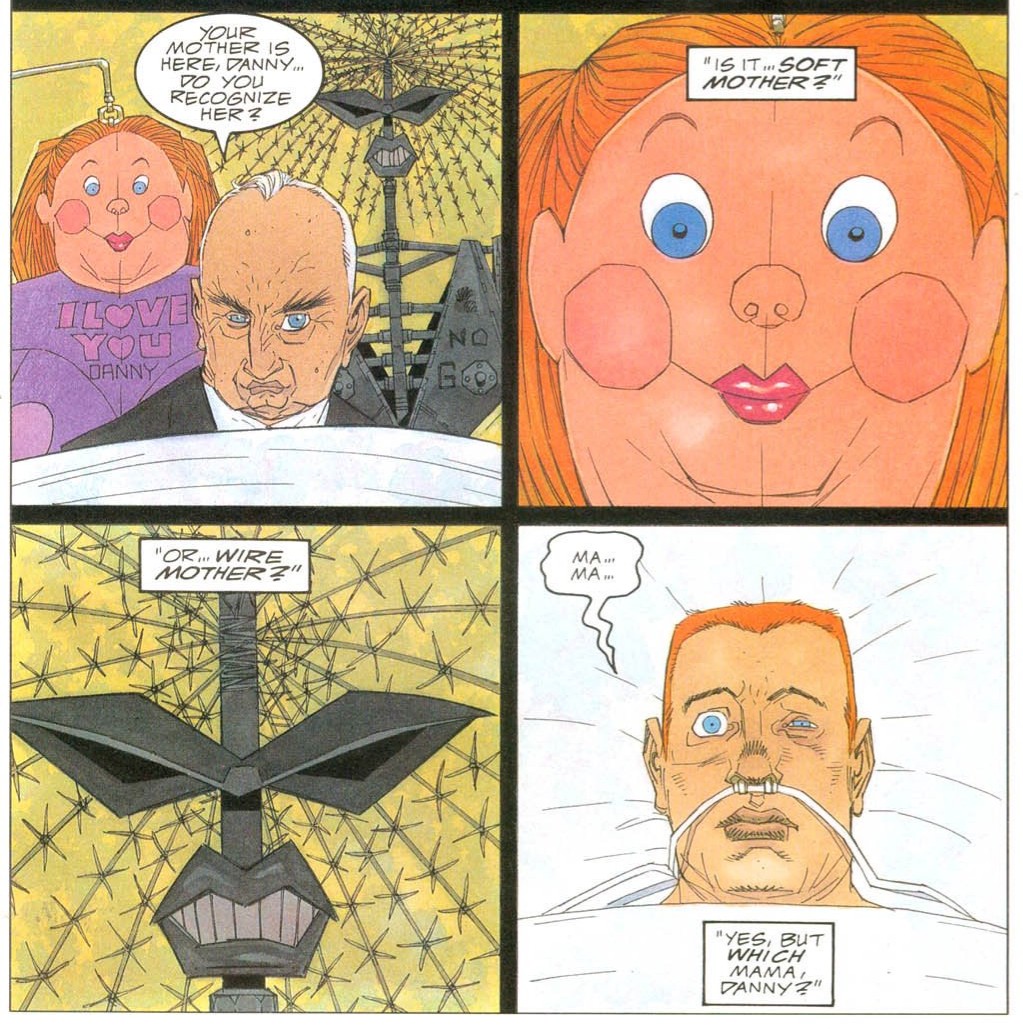 Pat Mill’s and Kevin O’Neill’s Marshal Law: Fear and Loathing was a revelation when I first read it.

It was the first thoughtful and structured parody of the hyper-violence and hyper-masculinity that permeated the superhero genre at the time, arguably more so than it does today.

Rather than just dialling the blood, guts and muscles up to 11 and calling it a parody, it takes a snapshot of the superhero styles of the time, cleverly caricatured by Kevin O’Neill, props it up like a cheap, mail order plastic Christmas tree, and proceeds to hang social, political, and cultural context onto its branches until the entire edifice is brought to the verge of collapsing. It’s overloaded, over the top, and a lot of fun.

As unreal as it may sound, the figure drawing in Marshal Law weren’t far off from the popular style at the time. in terms of how they misrepresented the human form. But by framing those exaggerated figures with a similarly proportioned rendering of violence, gore, and horror it revealed the grotesque nature of the superhero portrayals of the era.

The horror, because it isn’t a satire if it doesn’t challenge your faith in humanity, never came from the blood and guts on display. The horror came from scattering moments of realistic socio-politics in between the broad satirical strokes.

Some of it comes from the understanding that the defining characteristic of the US, post-Vietnam, is brutal, horrific war full of ‘collateral damage’. (Bear in mind that this series was published in 1987, three years before ‘Operation Desert Storm’.)

Some of it comes from a fairly hard to stomach criticism of the portrayals of gender in the superhero genre.

Some of the ideas it tries out are questionable but, overall, it is a brutally effective dissection of the genre, mostly because many of its most questionable aspects are directly inherited from its subject matter: superhero comics.

No other attempt at parodying the superhero genre comes close because none of them have the same level of understanding of how horribly self-destructive we are as a society. Nor do the many other superhero satires grasp how we internalise our society’s toxicity and let it poison our lives, relationships, work, and leisure. Marshal Law dug further into social studies, political theory, and gender studies than any of its contemporary superhero parodies and has been mostly unmatched since.

The most incisive moment, one that many others have picked on, is a scene that builds on Harry Harlow’s research on attachment: when given a choice, do you choose Soft Mother, or Wire Mother? Do you believe you deserve love? Or, do you believe you only deserve discipline?

Love or Money, Pick One

Humans? We’re messed up. We sometimes choose, and love, the Wire Mommy because we think that’s what we deserve. We rationalise it (‘Wire Mommy has milk! Food and resources are more important than kindness!') but ultimately we believe that we aren’t worthy of the comfort and kindness of a Soft Parent.

Web developers love an emotionally withholding Wire Mommy. We are committed to an ecosystem that manages to make everybody feel like they are constantly falling behind. We work with tools that written for free, constantly break, and cost an order of magnitude more in lost work than we would ever have lost from just paying for the tool properly in the first place.

It is what we think we’re worth.

We are a field that is driven by fads and is unconcerned with end-user value. Our best practices guarantee a broken future; the only question is how it will break. The core tools of our ecosystem are either unpaid or subsidised by some of the worst, most impersonal, and capricious multinational corporations in the world. And because of that those tools are either driven by fads and novelty or by the haphazard whims of an organisation that is entirely indecipherable to an outside observer.

Web development is the Red Queen of the Red Queen’s Race: no matter how hard we work, there we are still in the same place. We know this and, as a group, have largely accepted this. But it’s also the Wire Mommy. It is an unloving, harsh parent that buys our loyalty. It is the joyless experience that we think we deserve.

There is an interesting, engaging, and rewarding medium that underlies the field of web development. But the field itself is a Red Queen Wire Mommy and she offers no love or joy.

We seem to have forgotten that without joy and comfort, both in the making and in the experiencing of the thing, there is no purpose. Infant rhesus macaques intuitively grasped this in Harry Harlow’s research. We need to rediscover it in web development.

I’m not entirely sure how. But I do know that there is much more to the web medium than the mess that is the hyper-complicated, npm-dominated, fad-obsessed ecosystem that currently passes for web development.

We need to be better, kinder, and more joyful. And we aren’t going to get there with a new ‘framework’ that breaks in some way several times a year.